Review:
A hacktivist and a cat café owner decode the friend zone in this romantic comedy from the author of Undercover Bromance.
Alexis Carlisle and her cat café, ToeBeans, have shot to fame after she came forward as a victim of a celebrity chef’s sexual harassment. When a new customer approaches to confide in her, the last thing Alexis expects is for the woman to claim they’re sisters. Unsure what to do, Alexis turns to the only man she trusts—her best friend, Noah Logan.
Computer genius Noah left his rebellious teenage hacker past behind to become a computer security expert. Now he only uses his old skills for the right cause. But Noah’s got a secret: He’s madly in love with Alexis. When she asks for his help, he wonders if the timing will ever be right to confess his crush.
Noah’s pals in The Bromance Book Club are more than willing to share their beloved “manuals” to help him go from bud to boyfriend. But he must decide if telling the truth is worth risking the best friendship he’s ever had.
Review: 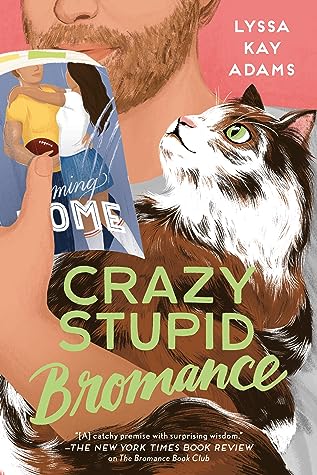 Crazy Stupid Bromance is the newest book in the Bromance Bookclub series. I love the concept of this series, where men figure out how to be better to the women they have feelings for by reading and learning from romance novels they read together and discuss. I think this book had a good combination of the romance between Alexis and Noah, and the bromance bookclub gang. I liked that the book club was there for Noah when he knew he’d made a mistake and they helped him figure out what to do next.
Alexis is a character we met in previous books. She’s one of the people that we learned in the last book was sexually harassed by a celebrity chef she used to work for. She spoke out about this harassment along with a few other women. She’s cultivated her car café into a safe space for other women that have been assaulted or harassed. She organized things like yoga classes and such to help others after she learned things that helped her. I liked that this was a part of the story. It wasn’t the whole story, not overtaking anything, but it was there. It wasn’t brushed aside or just mentioned once. It was a part of Alexis, so it was a part of the story.
As for the mysterious sister, and the father that Alexis never met that needs an organ donation, I don’t know how I felt about this. I liked that it was something close to the author’s heart (there’s an author’s note about her reasoning for choosing to write about organ donation). But it felt out of place in a romance novel.
Overall, I still am not totally sure how I felt about this book and that’s very clear in this review. I really liked Noah and Alexis together. Their friends to lovers romance was sweet and I really enjoyed seeing them take that step past friends. I read this book quickly and enjoyed it while I was reading it. I think most that like the friends to lovers trope will enjoy this one.

GoodReads Summary:
Braden Mack thinks reading romance novels makes him an expert in love, but he’ll soon discover that real life is better than fiction.
Liv Papandreas has a dream job as a sous chef at Nashville’s hottest restaurant. Too bad the celebrity chef owner is less than charming behind kitchen doors. After she catches him harassing a young hostess, she confronts him and gets fired. Liv vows revenge, but she’ll need assistance to take on the powerful chef.
Unfortunately, that means turning to Braden Mack. When Liv’s blackballed from the restaurant scene, the charismatic nightclub entrepreneur offers to help expose her ex-boss, but she is suspicious of his motives. He’ll need to call in reinforcements: the Bromance Book Club.
Inspired by the romantic suspense novel they’re reading, the book club assists Liv in setting up a sting operation to take down the chef. But they’re just as eager to help Mack figure out the way to Liv’s heart… even though she’s determined to squelch the sparks between them before she gets burned. 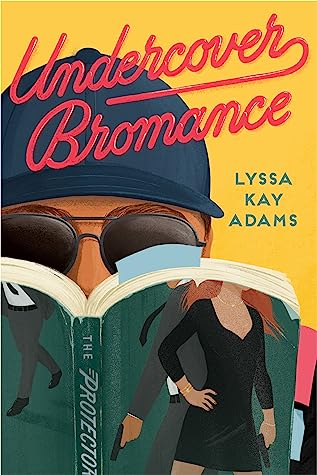 Review:
Undercover Bromance was even better than the first book. We follow Braden Mack as he tries to figure out his love life. He gets dumped by a girl because he’s just going through the motions and doing what he thinks she wants her to. While he’s on his final date he runs into Gavin’s sister in law, Liv. He also sort of got her fired. I really loved Mack. He’s a guy with a lot of heart. He just cares. He has strong morals and wants to do whatever he can to help. This comes off a little bit as trying to be a knight in shining armor. He wants to come to the rescue. This is a trope that annoys me sometimes, but it didn’t in this book. His desire to help comes from a good place. He just genuinely wants to right the wrongs that he finds in the world.
Then there’s Liv. She’s a prickly girl and doesn’t need help from anyone. She won’t take money from her sister to start her own restaurant, which is how she’s ended up working at one of Nashville’s hottest restaurants for a huge scum bag. When she catches him sexually propositioning one of her coworkers she flips. She’s determined to take him down. Liv is trying to find a new job is the chef business but she’s being blackballed.
These two team up to take down Liv’s old boss. This was wicked funny because all Mack wants to do is help and Liv wants to do this by herself. She doesn’t need help from anyone, but Mack is determined to be involved. There’s an attraction between the two and it’s hard to resist once they start working together.
Overall, I enjoyed this one. It was fun, despite the serious topic of sexual harassment (it’s honestly more than that, but I don’t know what else to call it.) I thought the topic was handled well. Even when Liv is not handling the topic well when talking to the girls that have experienced this harassment, she’s called out on it. I liked that she was called out for being wrong. I really cannot wait for the next book in the series, especially since I believe it is the Russian’s book.

GoodReads Summary:
The first rule of book club: You don’t talk about book club.
Nashville Legends second baseman Gavin Scott’s marriage is in major-league trouble. He’s recently discovered a humiliating secret: his wife Thea has always faked the Big O. When he loses his cool at the revelation, it’s the final straw on their already strained relationship. Thea asks for a divorce, and Gavin realizes he’s let his pride and fear get the better of him.
Welcome to the Bromance Book Club.
Distraught and desperate, Gavin finds help from an unlikely source: a secret romance book club made up of Nashville’s top alpha men. With the help of their current read, a steamy Regency titled Courting the Countess, the guys coach Gavin on saving his marriage. But it’ll take a lot more than flowery words and grand gestures for this hapless Romeo to find his inner-hero and win back the trust of his wife.

Review:
This was another book that I picked up because my bookish internet people were just absolutely raving about it. I’m glad I picked this one up because it totally had me laughing out loud. I loved the concept of a male book club that reads romance with the purpose of helping other men fixing their relationships. I love that the men come together to discuss the book in more than just the sense of what they’ve learned from it.
We follow a baseball player, Gavin, as he’s trying to win his wife back. She’s left him because she’s been faking it during sex for years. But it wasn’t just that and he doesn’t realize this until after the book club takes him in and helps him. I loved seeing him realize how he was wrong and what he can do to win his wife back, what he can do to make up for his lack of doing.
This story was just honestly so much fun. I am really excited to continue this series. I’ve already read the second book and I’ll be reviewing that one next, but there’s more coming and I’m beyond excited to read them.