GoodReads Summary:
For both Zane and Darby, their small-town roots hold a terrible secret. Now, decades later, they’ve come together to build a new life. But will the past set them free or pull them under?
Zane Bigelow grew up in a beautiful, perfectly kept house in North Carolina’s Blue Ridge Mountains. Strangers―and even Zane’s own aunt across the lake―see his parents as a successful surgeon and his stylish wife, making appearances at their children’s ballet recitals and baseball games. Only Zane and his sister know the truth, until one brutal night finally reveals cracks in the facade, and Zane escapes for college without a thought of looking back…
Years later, Zane returns to his hometown determined to reconnect with the place and people that mean so much to him, despite the painful memories. As he resumes life in the colorful town, he meets a gifted landscape artist named Darby, who is on the run from ghosts of her own.
Together they will have to teach each other what it means to face the past, and stand up for the ones they love. 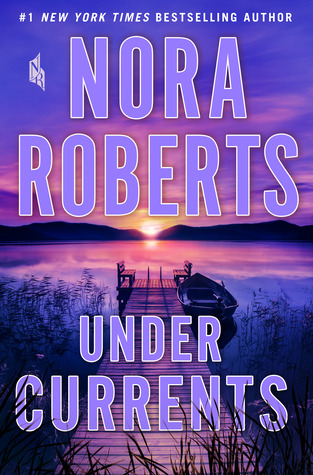 Review:
I will never ever have a bad thing to say about Nora Roberts. I’ve been such a huge fan of her books for so long. Under Currents was no different. The only thing that was different for my reading experience this time was that since I’ve started taking my college writing classes, I’ve begun to notice the writing in books more, rather than just plowing through the story. I found myself blown away with certain little things that she connected and certain lines. I think from the perspective of a fledgling writer Nora is a Goddess.
I’m going to try to keep this short and to the point, but longer than “I love this, go buy it and read it now.” Nora just has a way with the characters that make you fall in love with them. She gives them incredible histories and develops them beautifully. You can’t help but love her characters. In this story, that was Zane and all of his extended family. I hated the first part of this book because of Zane’s past, but once he starts living with his aunt, Emily, I just couldn’t get enough. Then we meet Darby. I finished this book and then proceeded to ask my aunt to help me plant some flowers in my yard. Her passion for what she loves to do was inspiring.
Nora’s books tend to follow a similar structure of giving the backstory on the characters, they fall in love, then some ‘big bad’ comes and shakes everything up. This one was similar but still had its own twist. I like that even though the structure was similar to most of her other standalone novels I still had such a good time reading it.
Overall, Nora Roberts can do no wrong. I will love every one of her books until the end of time. If you haven’t picked up anything by her, you should do so now.

5 thoughts on “Under Currents by Nora Roberts”