GoodReads Summary:
The Fated Sky continued the grand sweep of alternate history begun in The Calculating Stars. It is 1961, and the International Aerospace Coalition has established a colony on the moon. Elma York, the noted Lady Astronaut, is working on rotation, flying shuttles on the moon and returning regularly to Earth.
But humanity must get a foothold on Mars. The first exploratory mission is being planned, and none of the women astronauts is on the crew list. The international Aerospace Coalition has grave reservations about sending their “Lady Astronauts” on such a dangerous mission. The problem with that is the need for midjourney navigation calculations. The new electronic computation machines are not reliable and not easily programmed. It might be okay for a backup, but there will have to be a human computer on board. And all the computers are women. 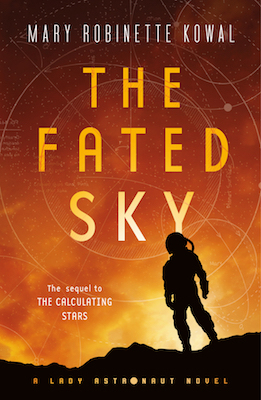 Review:
I have been living for Science Fiction lately. I’ve read so many good ones, including the first book in this series. Sadly, the sequel, The Fated Sky, just wasn’t as good as the first one. I think that’s because less happened. They were in space for most of the book, so while things were happening, the characters didn’t really go anywhere other than their space shuttle.
I still enjoyed this book, just not as much as the first. Another reason I think that is, is that Elma and her husband were separated for most of it. Their relationship was one of my favorite things about the first book. While we still got interactions from them, it was much less than in the first book.
Despite that, I still had fun reading this. The math and science of piloting a space ship are totally over my head, but I don’t think that took away from the story at all. We’re getting to know a lot of new characters, the fellow astronauts on board with Elma. I thought this was interesting because there was conflict with some and resolutions with others. The characters were the best part of this book.
I was a little thrown by the jump in time at the start of this book. It takes place ten years after the meteor hit, and that took a little bit of getting used to.
Overall, this was enjoyable. I liked the characters, the space setting, the challenges and seeing the characters overcome things. This is such an interesting alternate universe and I can’t wait to read more.

2 thoughts on “The Fated Sky by Mary Robinette Kowal”