Top Ten Tuesday was created by The Broke and the Bookish in June of 2010 and was moved to That Artsy Reader Girl in January of 2018. It was born of a love of lists, a love of books, and a desire to bring bookish friends together. Each week we talk about our top ten with a different topic provided by Jana. This week’s topic is top ten – Cover redesigns I loved/hated 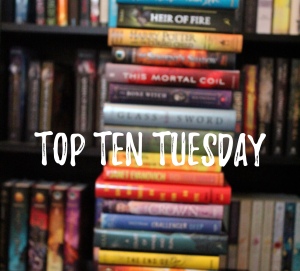 Throne of Glass by Sarah J. Maas
I hate covers with people on them (usually) so I totally loved the redesign.

Shadow and Bone by Leigh Bardugo
I adored the original covers for this series, but I also really adore the new covers.

Breathing Underwater by Alex Flinn
I have the original cover of this one, with the faces. So I much prefer the new one.

Prince Charming by Rachel Hawkins
While I didn’t hate the original, it was a little juvenile. I completely love the new one with the illustrated characters.

Vampire Academy by Richelle Mead
Another cover with faces, the new one isn’t as nostalgic as the old but I still like it better.

The Serpent King by Jeff Zentner
I don’t know why on earth they did this to Zentner’s wonderful book. The new cover is literally just a quote and I hate it.

Jane Unlimited by Kristin Cashore
I love the purple reflective cover, and I do like the redesign. I think the new cover reflects the story a bit better but I still prefer the original.

An Ember in the Ashes by Sabaa Tahir
WHY DID THEY DO THIS TO THIS POOR BOOK.

Flamecaster by Cinda Williams Chima
I like the original and the redesign. I think the original was a bit too similar to the covers of its sister series, so I understand the change.

The Girl of Fire and Thorns by Rae Carson
The original cover was nothing to write home about, but the redesign is everything I never knew I needed in a book cover.

Tell me about your favorite or least favorite book cover redesigns in the comments below!