GoodReads Summary:
Air Awakens
A library apprentice, a sorcerer prince, and an unbreakable magic bond…
The Solaris Empire is one conquest away from uniting the continent, and the rare elemental magic sleeping in seventeen-year-old library apprentice Vhalla Yarl could shift the tides of war.
Vhalla has always been taught to fear the Tower of Sorcerers, a mysterious magic society, and has been happy in her quiet world of books. But after she unknowingly saves the life of one of the most powerful sorcerers of them all–the Crown Prince Aldrik–she finds herself enticed into his world. Now she must decide her future: Embrace her sorcery and leave the life she’s known, or eradicate her magic and remain as she’s always been. And with powerful forces lurking in the shadows, Vhalla’s indecision could cost her more than she ever imagined.
Fire Falling
Soldier… Sorcerer… Savior… Who is Vhalla Yarl?
Vhalla Yarl marches to war as property of the Solaris Empire. The Emperor counts on her to bring victory, the Senate counts on her death, and the only thing Vhalla can count on is the fight of her life. As she grapples with the ghosts of her past, new challenges in the present threaten to shatter the remnants of her fragile sanity. Will she maintain her humanity? Or will she truly become the Empire’s monster?
Earth’s End
A woman awoken in air, a soldier forged by fire, a weapon risen from blood.
Vhalla Yarl has made it to the warfront in the North. Forged by blood and fire, she has steeled her heart for the final battle of the Solaris Empire’s conquest. The choices before Vhalla are no longer servitude or freedom, they are servitude or death. The stakes have never been higher as the Emperor maintains his iron grip on her fate, holding everything Vhalla still has left to lose in the balance.
Water’s Wrath
Librarian turned sorcerer. Sorcerer turned hero. Hero turned puppet.
The Solaris Empire found victory in the North and, at the cost of her heart and her innocence, Vhalla Yarl has earned her freedom. But the true fight is only beginning as the secret forces that have been lurking in the shadows, tugging at the strings of Vhalla’s fate, finally come to light. Nowhere is safe, and Vhalla must tread carefully or else she’ll fall into the waiting arms of her greatest foe. Or former lover.
Crystal Crowned
Long live Solaris.
One bloodthirsty ruler has been overthrown by another, casting the shadow of death over the Solaris Empire. Vhalla Yarl stands upon the stage of fate, prepared to do battle one final time. Fragile alliances will be tested and new bonds will be formed as the world is reshaped. She fights as the champion of peace, but when the night is darkest will she be able to pay the price of a new dawn? 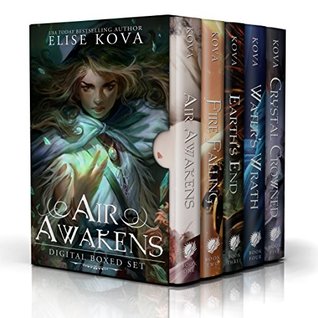 Review:
I’m going to do this as a series review because I’m reading it on my Kindle as a ‘boxed set’ so it’s basically like one GIANT ebook. So I’m going to just write some brief thoughts I had during each book and then do an overall how I felt about the series kind of idea. Also! This is a reread for me. I read this series about a year ago and LOVED it. So I’m rereading it because when Antonia finally started it, I really wanted to revisit this world

I literally wrote on GoodReads, “UGH, what a way to end the first book.” Because it’s so so true. The ending is killer. I also wrote, “I LOVE Vhalla. She’s a timid turned fierce girl who just wanted to work in the library. I’m usually kind of over the whole ‘woah I’m magical’ trope, but Kova does it well. I love the magic system in this series. It’s unique and interesting.”

“I’m simply learning where I’m meant to be.” It was the only response because it was the truth.”

“‘Fire needs air to live. Air fuels fire, stokes it, and makes it burn brighter and hotter than it ever could alone. But too much air will snuff it completely, just as too many flames will consume all the air. They are far greater than the sum of their parts together, but are equally as dangerous to each other’s existence.’”

“He’s a much better a person than I’ve heard people give him credit for. He’s worth a lot more than many of the people in this room, and it’s not just because of the crown on his head.” She looked back at the Emperor. “He wanted to help. If I am guilty of anything, it was putting him in a position where he felt compelled to do so.”

“She would cut it away. She would cut away the anger, the pain, and the frustration. She’d cut and cut until she was sculpted into something better, something stronger. They wanted to kill her, so this Vhalla would die, she resolved, and a new Vhalla would be born from her ashes.”

I LOVE Fritz, Larel, and Vhalla’s friendship. They make me laugh and keep me entertained. They’re likable and Kova really makes me care about them. They’re great friends to Vhalla even when she thinks she doesn’t deserve it. I love watching them each develop but also develop together as a group of friends.
Slow burn romance is always good. Though the hot and cold, back and forth because he has to put on a show for the world was slightly annoying. I love their romance anyway. It’s slow and satisfying following them as they get to know all the deep dark things about each other.
The Golden Guard, Prince Baldair’s guards, were funny and kind to Vhalla. I loved their scenes.
Less about the plot. More about story progression and character development. We’re following the characters as they travel with the army. But the characters are training to fight with fists and magic, learning more about each other and themselves.
WHY DID YOU DO THAT. HOW COULD HAVE LET THIS HAPPEN ELISE KOVA.
I’m not sure how but Kova has broken my heart and then in the last pages of Fire Falling, broken it AGAIN.

“There was something severed and rough about her, something tainted and, yet, at the same time those jagged pieces were the makings of something fearsome. She’d wanted to become someone the Senate would fear. Why not shatter the sky?”

“Magic, she was discovering, was like poetry. Once you understood the logic, the meter, the rhyme behind it, you could embellish upon it and make it your own.”

“Even something very small can cast a large shadow when it is close to the sun.”
“Unfortunately for them, one couldn’t break what was already broken.”

“You’re not someone to live in darkness or sorrow.” Larel reclined on the bed, inviting Vhalla to do the same. “You’re a light that can shine brighter than even the sun.”

Already so much more action. We’re finally getting into the thick of it. Vhalla is so fierce and really coming into her powers. In the fighting scenes, it’s so clear how much she’s grown from the timid girl in the library until now.
A slight love triangle in a yicky kind of way.
The emperor is TRASH.
HOW ARE YOU GOING TO DO ME LIKE THIS ELISE KOVA TWO BOOKS IN A ROW.

“I told you this would never be easy, I warned you. I begged you to spare my heart if you weren’t ready for this fight.”

“Truthfully, I think we both wanted the same thing: forgetfulness of the holes in our hearts left by other people.”

““I was raised in a world where I had thousands of friends, each one waiting for me on a shelf every day. While you practiced with the bow or sword, I read. The Imperial Library houses my confidants, and I spent nearly a decade hanging onto their every word. I know them well, and if you will stop questioning me, I will be so kind to impart their secrets to you.”

Vhalla what is you doing girllll?
Yaaas, Jax. He’s vulgar and entertaining but secretly a soft boy.
I’ll forever love Mohned for being a mentor to Vhalla. He did his best for her and I just love him.
I really love that Larel still plays her own special part in the story.
Vhalla’s “magic sight” is a little corny.
HOW DOES KOVA MAKE ME CRY IN EVERY SINGLE ONE OF THESE BOOKS SO FAR?! MY FRAGILE HEART CANT HANDLE THIS.
I like the northern princess, Sehra, she knows so much more than she’s letting on. I’m interested to see her role in the final book.

“The fire burned too hot, and we didn’t notice until it consumed everything.”

“But never lose faith, never lose your beautiful heart. Don’t let them win, those wicked men and women who would do anything to cage you or kill you.”

“You can’t buy peace with war.”

How could you do this to Daniel? He got the short end of the stick again and again.
Even though the circumstances are pretty awful. I love the friend group (despite those that are missing). Jax is as vulgar as ever, Fritz is a cinnamon roll and I love him, Elecia is sassy and all sharp edges and Vhalla and Aldrik are perfect as usual. But all of them together is funny and sassy and full of love.
Vhalla seeing her childhood home and her father was so sweet and heartwarming. It was wonderful to see this sweet innocent moment amidst the chaos.
I really appreciate that Vhalla isn’t just suddenly good at leading. She’s learning from Aldrik. And while she does have people skills and good ideas, she still takes the time to watch him and learn from his example. She also doesn’t hesitate to ask questions when she’s unsure.
AGAIN WITH THE CRYING.

“I crave peace, and I fear that I am a creature whose fate is written in bloodshed.”

“I suppose it’s a good thing I like books more than most people,” Vhalla muttered.

“You are trapped in a vortex. Time and again, you will repeat your fate dutifully. If we cannot change fate itself and save our world.”

“You have hopes that no one else would allow themselves to even dream of.”

“Every chance worth taking will make you a little scared. That means you’re taking a risk. And where there is risk, there is reward.”

“To kill a monster, you must become one yourself.”

I still adored this series. I still cried my eyes out at each of the heart-wrenching moments Kova wrote.
I really really enjoyed the seeds that Kova planted to lay the foundation for the next series (starting with Vortex Visions which I will be starting ASAP.)
I think the ending was perfect especially with what I said above. The fact that there’s another series and we’re going to see more of this world I think the way Crystal Crowned ended was excellent. It left me wanting more where I want to neglect all the other books I need to read and just go right to Vortex Visions.
Finally, I loved this series. I love these characters. The relationships are amazing. There is diversity and elemental magic and war and all of the things that make an incredible story. If you haven’t read these books please go do so now.

8 thoughts on “Air Awakens: The Complete Series by Elise Kova”