Summary:
They have tried to squeeze us out, to stamp us into the past. But we are still here. And there are more of us everyday. 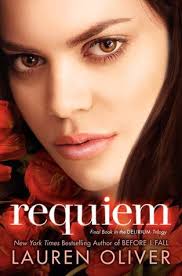 Review:
I found Requiem to be almost a combination between the first two books. After finishing this book, I find myself able to say that Delirium was my favorite book of the trilogy. Requiem was past paced at times, but also had some slow points. I thought this was nice, I got a chance to process all the action. I really enjoyed the final book in the story of these characters. Oliver came up with a seriously unique story line. I liked having something new to read.
As for the characters, there was so much that happened in this book. Alex is back after Lena thought he was dead. She also has the guy she’s almost moved on with, Julian. My opinion of these characters changed quite a bit while reading Requiem. Lena makes herself seem like a flighty school girl. She can’t decide which guy to be with. She was always second guessing her thoughts and it was kind of annoying. Other than that, she was the same old stubborn, determined, hardworking female lead that I loved to read about.
When it comes to Alex and Julian my opinion of them kind of switches. I absolutely adored Alex in the first book, Delirium. I spent the second book wishing that the first had ended differently and that Julian would go away. In the pages of Requiem, Julian really proves himself to the rebellion. He shows that he’s willing to work for their cause, he was willing to help in any way. He also tried to hard to be supportive of Lena while he knows she’s struggling with her feelings. He stays a nice guy, just trying to do the right thing. Then there’s Alex. He was my favorite, then he came back a total douche. He spends most of the book being a complete asshole to Lena. I think he was really just hurt that Lena had feelings for another person. The book ends in Alex’s favor. He becomes my favorite again, thankfully.
Requiem was a pretty good ending to this very interesting trilogy. My favorite was totally the first book in the series. Any readers that like action and romance and chaos would enjoy reading these books. So go read them now!