Summary:
Nothing has been the same for eighteen year old Stacey since her boyfriend Jacob died. For months she stayed at the beach cottage they shared before Jacob’s tragic accident, refusing to give up hope that somehow, somewhere, Jacob was still alive.
But Stacey knows she can’t put off rejoining the world forever. Lucky to have a full scholarship to prestigious Beacon University, Stacey hopes she can finally put her past behind her.
Devastated when she starts having more disturbing dreams, Stacey once again turns to the folk magic she learned from her grandmother to find out what they mean. Her hopes that she can solve this mystery on her own are dashed when the college president calls her in for a private meeting-and reveals that his daughter Porsha is having nightmares too.
But while Stacey dreams of a ghost, Porsha is dreaming of a murder she’s convinced hasn’t happened yet. Porsha’s fragmented nightmares foretell a tragic death, and may also shed light on a shocking revelation that could change Stacey’s life forever. Together the two must decode their dark dreams to save a life-a risk that may cost them their own. 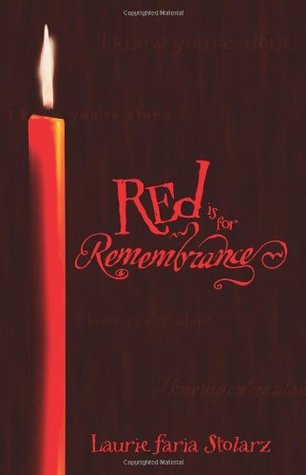 Review:
Okay, so I may have said at the end of the second book, that the series could have just ended there. This is still true, but I’m so very glad Stolarz went on to write this book. Red is for Remembrance was without a doubt my favorite book in this series. This book is going to be a bit harder than usual to review without giving away too many spoilers, but I’m going to do my best.
So, Red is for Remembrance is told with two different points of view. This kind of annoyed me a little because there wasn’t too much information on the second point of view. One is obviously Staceys, and the other is this mysterious person, Shell. He lives at a commune type place on Cape Cod. As soon as the Cape was mentioned I thought it was Jacob. The camp is a very strange place. I didn’t like it at all. This place was not a good environment at all and Shell figured this out. Shell was an interesting character. He has no memory of his life before coming to the camp and is expected to blindly follow what the campers in charge tell him. Big surprise, he doesn’t. While keeping up the pretense that he’s still completely loyal he starts remembering his life and starts doubting the intentions of the camp. Along side him his closest friend, Brick, helps him remember who he really is and the two try to plan an escape from the camp. Brick was kind of a secondary character, but I really liked him. He had a great personality. He was funny and always tried to make the best of things. Shell was also a great character. He had a hard time adjusting to the rules of the camp. He was very firm with what he believed and always tried to do the right thing without hurting anyone. Shell was a very sincere character, even though he was very confused about who he was. I liked the characters, but wasn’t so much a fan of the two points of view.
Now, Stacey’s part of the story. The book starts off with Stacey and Amber just settling into college. I really liked Amber in Red is for Remembrance. She’s a fair bit more mature. This might also just be me realizing that she’s just a weird character. But she really steps up for Stacey in this book. She really is a great friend, even if sometimes she’s wrong in her assumptions, it’s the thought and effort that count. Within the first couple of pages, there’s a brief description given of all that Stacey has had to go through in the past couple of years. I really enjoyed that. I feel like it reminded me of all the shit Stacey’s had to deal with, and how strong she is to have gotten through it all. Stacey is one of the strongest main characters I’ve read about in a while. In the beginning of this year she is too consumed with her loss and just wants to sleep all the time. Which I can seriously understand. But with some help from Amber and friends, Stacey starts being who she is again. She helps a young girl who experiences nightmares like Stacey. She’s always doing the right thing, even if it’s something really hard for her. She never strays from the path she knows she should take. And she believes in herself so fully. She is an amazing main character. Then there’s Porsha, the girl who is having nightmares. I wasn’t sure of her at first, but I ended up really liking her. She reminds me of Stacey a bit, just a little less confident. Once Stacey shows Porsha she’s not crazy she does everything she can to help this person that she’s dreaming about. Like Stacey she’s passionate about helping and wants to do the right thing. I loved all the characters in this story.
I said it already, but this was absolutely my favorite of the series. There were times that the description was so good I couldn’t help but cry right along with Stacey. I felt like I was mourning him as well. Red is for Remembrance was written very well. I still think this series is aimed for a younger reading age. There’s no swearing or really anything inappropriate in this book. Everything is put into a silly way, or described in code to be acceptable for the younger readers. I actually really ended up enjoying this series and following Stacey and gang through their adventures. So, anyone that thinks they might like them too should totally give them a try.